A study published this month by The Astrophysical Journal Letters (ApJL) reported on the discovery of an object belonging to the rare group of ultra metal-poor stars (for astronomers, "metals" are roughly all elements heavier than helium). The star, known as SPLUS J2104-0049, was selected for further observations with the Gemini South and the Magellan Clay telescopes, both in Chile, using medium- and high-resolution spectroscopy.

“In the field of stellar archeology, ultra metal-poor stars are believed to have been formed out of gas clouds enriched by the very first generation of stars formed in the universe,” explains Vinicius Placco, Associate Scientist at NOIRLab, based in Tucson, Arizona (USA), who led the research. "Currently, the group of known ultra metal-poor stars consists of only 35 objects."

A peculiarity of SPLUS J2104-0049 is that it has the lowest carbon abundance ever measured for an ultra metal-poor star. "This challenges current models on the evolution of the first stars", the researcher completes.

Placco's research was parallel to the work of his former Ph.D. student Devin Whitten, from the University of Notre Dame (USA). This work, published this month by The Astrophysical Journal, used artificial neural networks to estimate stellar atmospheric parameters and carbon abundances for more than 700,000 stars from the second data release (DR-2) of S-PLUS (Southern Photometric Local Universe Survey).

This was also the first time that carbon abundances were calculated based on photometry. Usually, these physical parameters are obtained from spectroscopy, which currently makes it very difficult to gather data for such a large number of stars. The results of this work are essential to validate theories for the formation and evolution of Milky Way-like galaxies and still provide interesting and reliable candidates for future spectroscopic studies.

A sky map of the southern hemisphere

S-PLUS is mapping the southern sky from Cerro Tololo (Chile) using an 86-cm diameter robotic telescope. The survey images are obtained with a camera capable of recording a region of the sky equivalent to a square where two full moons would fit loosely on each side.

One of the differentials of the S-PLUS is the use of the 12 photometric filters of the so-called Javalambre system, which uses seven narrowband filters in addition to the five broadband filters used by most astronomical surveys. These seven additional filters are narrower and strategically designed to allow for the study of specific spectral features, which makes it possible, for example, to measure the effective temperature and obtain selected chemical abundances of stellar sources.

The S-PLUS DR-2 represents the addition of data and images from an area of 950 square degrees, increasing the area available in the previous catalog by a factor of three. The images were taken between 2016 and 2020 and include magnitude measurements in the 12 photometric bands for more than 21 million new objects.

The database has several tools for its exploration. “Interested users can obtain images of the regions of interest through a simple and friendly interface, and are capable of assembling color images at the same time”, says Gustavo Schwarz, Computer Science student at the Universidade Presbiteriana Mackenzie and an undergraduate research fellow at IAG-USP, São Paulo, who developed the system. "In addition, we provide a Python package that  allows direct download of the data".

For a correct interpretation of the data, it was necessary to develop a special calibration technique for S-PLUS, taking advantage of calibrated measurements from other surveys. “Calibrations of similar projects are transformed into the 12 filter system used by S-PLUS through the use of synthetic stellar models. This type of procedure allows one to optimize the telescope time available for scientific observations, reducing the time needed to complete the project by around 15%”, explains astrophysicist Felipe de Almeida Fernandes.

Fernandes, who is a postdoctoral fellow in the Astronomy Department of the Institute of Astronomy, Geophysics and Atmospheric Sciences at the University of São Paulo (IAG-USP), worked on the calibration efforts and leads the article submitted to the Journal Monthly Notices of the Royal Astronomical Society (MNRAS), which describes the S-PLUS DR-2 launch.

With the large volume of data obtained each night by S-PLUS, it would be impossible for astronomers to manually analyze and interpret all information available. To address this type of problem, the analysis of images and processed data includes methods such as artificial intelligence algorithms.

An example is a routine for separating stars, galaxies, and quasars that was developed to make an adequate classification without human intervention. For this, the program underwent “training” and learned to differentiate each type of object. “In addition to including the brightness values in the 5 broadbands of the filter system, as it is usually done, the S-PLUS program also included morphological characteristics obtained by the project itself, as well as data from the WISE satellite, which observed the entire sky in the infrared,” explains Lilianne Nakazono, a doctoral student in the Astronomy Department at IAG-USP who leads the object classification efforts. According to Nakazono, who is the first author of an explanatory article submitted for publication also by MNRAS, the accuracy of the algorithm exceeds 97%, that is, for every thousand objects, only about 22 have an incorrect classification.

Clécio De Bom, a researcher at the Brazilian Center for Research in Physics (CBPF), also uses artificial intelligence to analyze the massive S-PLUS data set. A new article led by De Bom applies models of deep Neural Networks to automatically identify the shape of galaxies: spiral and elliptical. This work allowed researchers to evaluate the use of the S-PLUS 12 magnitudes for this type of classification.

“Due to the large amount of data available, this type of visual analysis is becoming increasingly difficult to be done by human specialists”, evaluates De Bom. “In addition, several models of deep learning are more efficient than human in certain visual analysis. The number and fraction of different shapes of galaxies are associated to their formation histories and to the history of formation of larger structures in the Universe, as galaxies clusters”.

Another example of the use of artificial intelligence refers to machine learning to obtain distances to objects that are beyond our galaxy. This technique allows for the determination of the distance to the object through a statistical analysis of its brightness in the filters used by the project. “For the algorithm training, photometric databasis were used, such as S-PLUS itself, GALEX [an ultraviolet satellite], 2MASS and unWISE [projects that mapped the entire sky in the infrared]”, explains Erik Vinícius de Lima, a Ph.D. fellow at IAG-USP and the first author of the article submitted to the Journal Astronomy and Computing, detailing the work.

The S-PLUS project is an international project with the participation of researchers from countries such as Brazil, Argentina, Chile, USA, and Spain, bringing together more than 100 scientists among researchers and students. The S-PLUS is based at IAG-USP in São Paulo and its Principal Investigator is Cláudia Mendes de Oliveira, full professor at USP. Roderik Overzier, a senior researcher at the Brazilian National Observatory, is the project scientist. S-PLUS was founded by the University of São Paulo, National Observatory, Federal University of Santa Catarina, Federal University of Sergipe, and Universidad de La Serena, with important contributions from INPE and CEFCA and funding from FAPESP, CNPq, CAPES, FAPERJ, and FINEP.

Participation as a member of the S-PLUS project (www.splus.iag.usp.br) is open to all scientists from Brazilian institutions. Several Brazilian researchers also take part in the collaborations J-PLUS (www.j-plus.es) and J-PAS (www.j-pas.org), these in the northern hemisphere, whose data, together with S-PLUS, will cover almost half of the entire celestial sphere. 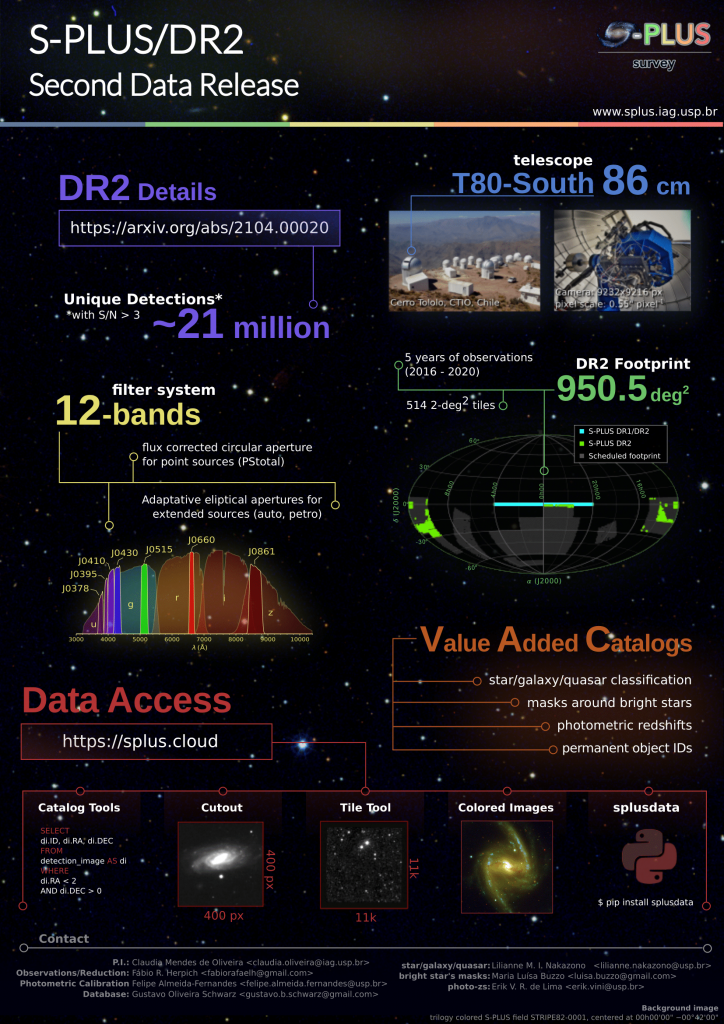 The Photometric Metallicity and Carbon Distributions of the Milky Way's Halo and Solar Neighborhood from S-PLUS Observations of SDSS Stripe 82
https://arxiv.org/pdf/2104.00016.pdf